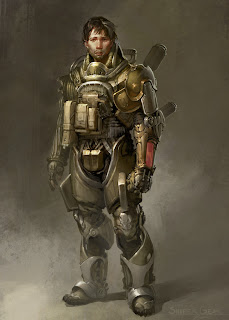 I wanted to do more quick normal human character designs.  I decided to do a 'space marine' (as I've never done one) but instead of a snarling hulking badass, more of a soldier from WW2, a young kid that maybe tricked the draft, and is now realizing he may have made the wrong decision.
Tech wise, I decided to try to figure out how gear would change for a Sniper in the future.  I gave him this massive gyroscopic stabilizing sleeve for his holding hand.  And his legs are mounted with a sort of muscle enhancement/ shock absorbing system.  They are working on that technology right now, so I just sexied it up a little.  I think it'd be cool if they still wore ghillie suits in the future though!
Posted 2:43 PM

You hit every story point in this image.
Love it.

Awesome stuff, this is brilliant.

Great piece of work, Sir. New to your work (and site), but feel like a kid in a sweet shop.

Regarding the ghillie suit - thought it would be funky to have a semi-organic ghillie suit that links to the wearer via a neural port of some description, and once on reacts to the surroundings like an octopus does, changing shape and colour in a matter of seconds.

One question, if you don't mind - graphic tablet recommendations for beginner/entry level? My cheap 'n' cheerful tablet died coming out of hibernation. Many thanks.

oh man... this is sick! I love your paintings. especially this one! character is designed really well I can see he's sort of coward type D:

I really liked this part of the article, with a nice and interesting topics have helped a lot of people who do not challenge things people should know, you need more publicize this so many people who know about it are rare for people to know this, Success for you..